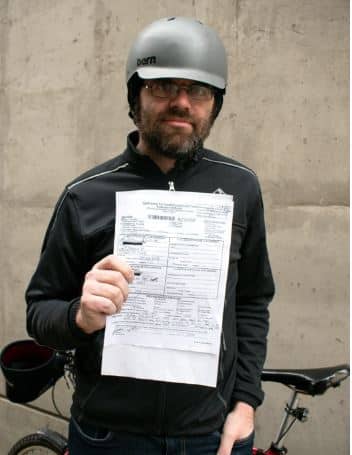 Bryan Agnello with the driver’s court claim for $700.

You can’t make this stuff up……

Did you know that Rochester has a bicyclist who can ride 80 miles per hour?

That was the crazy claim made by a driver who rear-ended and injured the bicyclist one rainy evening last month on a Rochester street. The bicyclist, Bryan Agnello, was struck from behind and thrown onto the hood of a car driven by 22 year old Jovonte Cook.

Bryan was injured but he had decided to just move on and not pursue a personal injury lawsuit against the negligent driver but then weeks later he received a Small Claims Complaint by Cook incredibly claiming Bryan should pay him $700 for the damage done to his car.  Some people have some nerve…….

But it gets even better……  In a frivolous small claims filing in Rochester City Court, Cook said Bryan was riding “60” mph.  Are you kidding me, 60 mph?

And then it gets even more outrageous…….   When contacted by the news reporter, Cook said Bryan’s speed was actually “80 mph (!)” before he hung up on the reporter.

And you may be asking yourself, why did this driver think he could get away with this nonsense?  Well, it probably starts with the fact that the police officer inexplicably (and incorrectly) failed to ticket the rear-ending driver.  If this had been a car rear-ending another car, you can be sure that the officer would have ticketed the rear-ending driver.  But what I see all too frequently in my many cases representing injured bicyclists, is that the police do NOT issue a ticket to the driver responsible for crashing into the rider.  That’s why I spend a lot of my time trying to educate police and judges that NY Vehicle and Traffic laws apply equally to drivers and bike riders.

As I told the reporter, in NY bike riders have the same rights and obligations as motorists: “There is no legal basis for this ridiculous claim. In New York, if one vehicle rear-ends another vehicle, the rear-ending driver is legally responsible because it is his or her legal duty to keep their car under proper control so as to not rear-end another vehicle. And this is true whether it is raining or snowing, day or night.”

I am helping Bryan on this case and told him he should file a Counter-claim against the driver who rear-ended him because it will permit the judge to find in Bryan’s favor if he feels that the motorist, rather than Bryan, was at fault in causing this rear-end collision.  Bryan has filed a $2,500 counterclaim that covers the cost of his recuperation time and the destroyed bike – his only mode of transportation.

To read the full story, please go here. You won’t be disappointed.