What is the Difference Between Civil and Criminal Cases in Bicycle Accident Cases? 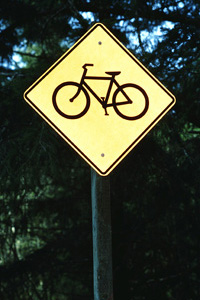 There is often great confusion about the distinction between civil and criminal law in bicycle accident cases so I wanted to address this issue and hopefully provide some clarification.

To put it simply:

As with almost everything in the law, this simple explanation requires more explanation. Please bear with me as I explain the important distinctions with greater detail.

As an avid cyclist myself, I know all too well the dangers we bicyclists face due to careless or inattentive drivers.  We all know them: the drivers who are busy talking on their cell phones … adjusting their radios … or simply not watching where they are going.

Unfortunately, those moments of carelessness or inattentiveness by drivers can mean the serious personal injury or even death of a bike rider who has virtually no protection against a huge car or truck.

In those cases of motorist carelessness or inattentiveness (lawyers refer to this as “negligence”) that harm a bicyclist, I am often hired as a New York or Pennsylvania bicycle accident lawyer to pursue a civil claim or lawsuit against the insurance carrier for the driver who hurt or killed the cyclist.

A civil claim means a claim for compensation (money) to compensate the injured bicyclist for his or her injuries, disability, lost wages, medical expenses, damage to the bicycle or other damages.

A civil claim does NOT involve putting someone in jail, putting them on probation, taking away their driver’s license or forcing them to pay a criminal fine.  Those types of penalties are imposed by our CRIMINAL laws.

As noted above, criminal cases involve intentional or criminally reckless conduct that violates a particular criminal law.  Crimes are punished by imprisonment, fines or other penalties imposed by the applicable law.  Each state and or municipality enacts laws that are designed to prohibit behavior that is harmful or dangerous to the public.  Because each state/municipality has its own laws, there is often wide variation between the laws in one state versus the laws in another state.  That’s why you must be very careful in reading legal information on the Internet because a legal discussion that involves the analysis of the law in one state may be totally inaccurate in another state.

Criminal cases are prosecuted by “the State” — that is, the police and the criminal prosecutor’s office — NOT by your own private attorney.  Private, civil attorneys like myself, can certainly confer with the criminal prosecutor (called the District Attorney or “DA” in New York), offer investigative assistance and try to encourage prosecution of particular criminal defendants, but ultimately all strategic decisions are made by the prosecutor’s office.  This can be extremely frustrating to bicyclists and their personal civil attorneys when either the police or the DA decides not to prosecute a motorist’s crime against a bicyclist.  In the event that the prosecutor decides not to press charges, the cyclist’s only remedy is to pursue a civil claim.

In all cases, whether civil or criminal, the party bringing the lawsuit (the “plaintiff” in a civil case or the “prosecution” in a criminal case) has what is called the “burden of proof.”  That is the standard of proof that must be proven for the party bringing the lawsuit to win.  At the end of a case, either the judge (if it is a “bench trial” which is a trial to a judge only) or the jury (if it is a jury trial), must deliberate and reach a decision as to whether the plaintiff/prosecution met their burden of proof on every required element of the case.

There is a drastic difference in the burden of proof that is applicable in a criminal versus civil case:

I hope this explanation shines some clarity on the relation between civil and criminal claims.  In many of the bike accident cases I handle there is a close interplay between the criminal and civil cases:

My goal on behalf of my injured bicyclist clients is to make sure that they are FULLY compensated for ALL damages suffered by them.