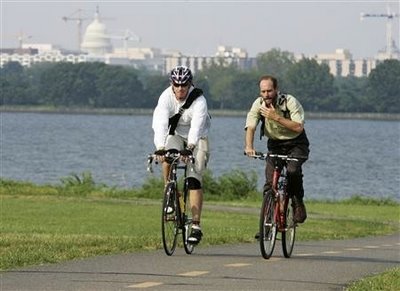 You won’t believe how ignorant and offensive some people can be about sharing the road!

A cyclist friend of mine sent me an unofficial transcript of a Washington D.C. radio show in which the host made incredibly stupid and crude remarks about “tapping” bicyclists off the road and worse. I wanted to share this info because I can’t believe that this guy can get away with saying these things and I’d like to clear up exactly what rights bicyclists have on the road.

As a bike accident lawyer who has represented too many dead and badly injured cyclists, what scares me about radio host’s Tony Kornheiser’s ignorant comments is that he has said out loud what many motorists secretly believe — that cyclists have no right to be on the road and that the roads belong ONLY to cars.

Sorry, Tony and other ignorant motorists, under New York law, cyclists have a perfect right to the road. See the blog post I wrote about a dangerous Facebook page and the real rights cyclists have to be on the road. In fact, Ray LaHood, Secretary of Transportation for the United States, has recently issued a policy statement ENCOURAGING the greater use of bicycles for transportation in the U.S.

The comments are from the Tony Kornheiser Show, a sports radio talk show out of Washington, D.C. Here’s the conversation, as related by  Tim Andrus:

Tony Kornheiser on cyclists: “Run them down”

Follow this link for more on the reaction of cyclists and Lance Armstrong. And try this one for the transcript of the Armstrong interview on Kornheiser’s show.

I didn’t hear the show today (or any show ever really) but someone wrote me to say that on this morning’s radio show on AM980, during a discussion of the new proposed bike lanes on Pennsylvania Ave, Tony Kornheiser condoned running down cyclists with his “big, more powerful car.” I’m listening to the show now, Once they put today’s show online, I’ll listen to it, so I’ll see if I can find where it happened (update: sometime around minute 38) and what exactly was said. But, let me know if you heard it. The person who wrote me about this also said that they contacted the radio station about the comments and they did not deny them, said that they took it seriously and that many people had called to complain.

Update: Here’s my take at the transcript. It’s not perfect, but it captures it. I don’t know the people so pardon my nicknames for them.

Kevin: Reading: “The center of Pennsylvania Avenue from the White House to the Capitol soon may be reserved for just two things: the president’s inauguration and people riding bicycles. A pair of bike lanes are destined to grace the middle of one of the country’s most fabled boulevards, an avenue that ranks as a destination with Broadway, Fifth Avenue, Hollywood Boulevard and Bourbon Street. The two lanes will be part of an expanding network of dedicated bicycle lanes in the District, soon to include L, I and Ninth streets NW and more of 15th Street NW. ”

Tony Kornheiser: When I read about this early this morning, and I just assumed this would be one of those dedicated bike lanes…

Kevin: To the right

Other Dude: Like you get at the beach, just a little strip

TK: …on the right hand side, where bicycles are free to go – maybe two by two, but mostly one by one.

Kevin: And they never use them

TK: And I’m fine with those. Then I heard on Channel 4 that these things were going to remove an entire lane of automobiles, which last time I looked the roads were made for automobiles, and that they were going to somehow be in the middle and not on the sides and we were somehow going to be dominated, as if this was Beijing, by hundreds of thousands of bicyclists. And I don’t really care what they do on Pennsylvania Avenue, if they can’t ride a car on that anyway, but how are they going to get the bikes down there? They’re going to have to go through other streets. I think this is a terrible, terrible idea. I don’t mind those one lanes, but you get in Rock Creek Park and 3 or 4 of these people start riding abreast, and I swear to you it’s all you can do to not RUN THEM DOWN, like Wile Coyote’s, run them over. Just stay on the right. Stay on the right. I’m happy to share the road with you, but by share the road what I mean is you have room on the right and I have room on the road. Get the hell out of my way. Am I wrong on this?

Woman: Here’s the problem I have. I’ll give you bike lanes if we open up Pennsylvania Avenue on one side of the White House and the other street behind…You add this and it’s going to make it even worse worse.

OD: These chesty cyclists, I mean they take that right lane and they’re already moving over to the middle.

TK: And they all wear…my God…with the little water bottle in the back and their stupid hats and their shiny shorts, they are the same disgusting poseurs that come out in the middle of a snow storm with cross country skiing on your block. Run them down. I mean, let them use the right I’m OK with that.

OD: Or they can ride on the top of the curb

TK: I don’t take my car and ride on the sidewalk because I understand that’s not for my car. Why do these people think that these roads were built for bicycles?

Kevin: Because they’re crunchy granola, they just want us to live in a cleaner world.

TK: I know someone’s going to hate me for this, am I wrong?

Kevin: Yes they do.

TK: And then when you do, they get angry. What is that about?

Kevin: If you honk, they slow down…in front of you

Kevin: Just a spill, not a fatal spill, but a little spill.

TK: If you’re not rubbing, you’re not racing right? So you pop them a little bit and see what happens.

Kevin: They’re so annoying. This is a Fenty move. He’s a big cyclist.

Woman: With his security detail of course.

Woman: Here’s the argument they would make – because the little lane on the right is often covered up by cars that are parked at the wrong time of day and buses that have pulled into the path…

OD: Tell them to take Metro

OD: It seems a little discriminatory to me. What about unicyclists? Why can’t they have a lane

TK. They can have the same lane on the right. Anything with less than four wheels, or three wheels…

Kevin: …can use the right lane, if there is one. If there isn’t one, take the Metro.

Kevin: There are plenty of paths. The Capitol Crescent Trail gets you to Georgetown and then you can take the Metro from there. Get on a bus.

TK: Yes. What is their problem?

Kevin: OK get this Tony, we talked last hour about the expansion of bike lanes in the District, apparently a right hand bike lane isn’t enough for these people.

TK: It’s such a plague

Kevin: We’ve got to move them to the middle of the street.

TK: Why are they in the middle of the street?

TK: I want to be in the middle of the street. I’m driving a car.

OD: It seems to increase the likelihood that they’ll be struck

Kevin: Google doing more for these people, they’ve come out with their latest product Google Maps for Bikers.

Kevin: So now you can google map your…

Kevin: The Oregonian, which is the newspaper of note in Crunchville, USA – Portland, Oregon. The Oregonian panned the new Google maps for cyclists, saying it was “incomplete and inadequate”. Meanwhile a couple of cyclist stories that have broken in the last few hours that are reflective of this category of people. In Brunswick Maine, two men on bikes tried to rob a pregnant woman. In Windsor, Ontario, two men on bikes assaulted a male driver through the window of his car after a road dispute. We’ve all been there before.

TK: They do that all the time. They go right up to your car and they start banging on your car, trying to make you feel guilty for owning a car and somehow the law does not allow you to run them down.

Kevin: In St. Louis, a woman on a bike riding in rush hour traffic blew a tire, tumbled into the middle of the road in front of oncoming traffic, she was run over by a taxi. She survived, but the taxi driver had to be rushed to the hospital with an injured neck. Meantime, Neal from Rockville wrote in to say that he recommends that you buy a Toyota, as it provides you with a built-in defense if you accidentally strike a bicyclist while driving to work.

Later, in response to a story about a prom being canceled to prevent gay couples from attending, he said “People just need to stop being awful to each other.” That’s good advice.

There were a few emails then about cyclists in the last two minutes. He ends with “if you’re out there tonight in the rain cyclists, wear white. Which you can wear with your ridiculous shirt and your fat thighs in bike shorts.”

So yeah. Just full of a lot of ignorance, windshield perspective and anti-cyclist comments. I don’t see a point in refuting them one by one. They’re just so ridiculous.