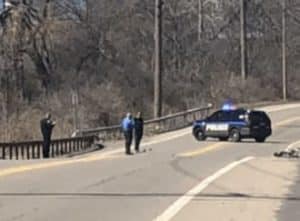 A Chemung County grand jury has indicted an Elmira Heights woman who was arrested in April after an Elmira bicyclist was struck and killed in a fatal hit-and-run crash near Eldridge Park in Elmira.

Police said Harnas was driving drunk on Grand Central Avenue between the Clemens Center Parkway Extension and East McCann’s Boulevard in Elmira during the afternoon of April 9 when she struck a bicyclist, Charles G. Rogers, 68, of Elmira. Rogers died a short time later at Arnot Ogden Medical Center.

Police said Harnas drove away from the crash scene without stopping but a witness alerted police and followed Harnas until police stopped her in Elmira Heights.

Harnas, who remains in the Chemung County Jail in lieu of $250,000 bail, was driving a 2006 Ford Fusion that she did not own without a license after her driver’s license had been suspended six times! Her blood-alcohol content shortly after the crash was .22 percent, nearly four times the legal intoxication limit, according to the indictment.

As a local bicycle advocate and a board member on the New York Bicycling Coalition, my heart goes out to the family of Charles G. Rogers and I will work to ensure that this reckless drunk driver is prosecuted to the fullest extent of the law.