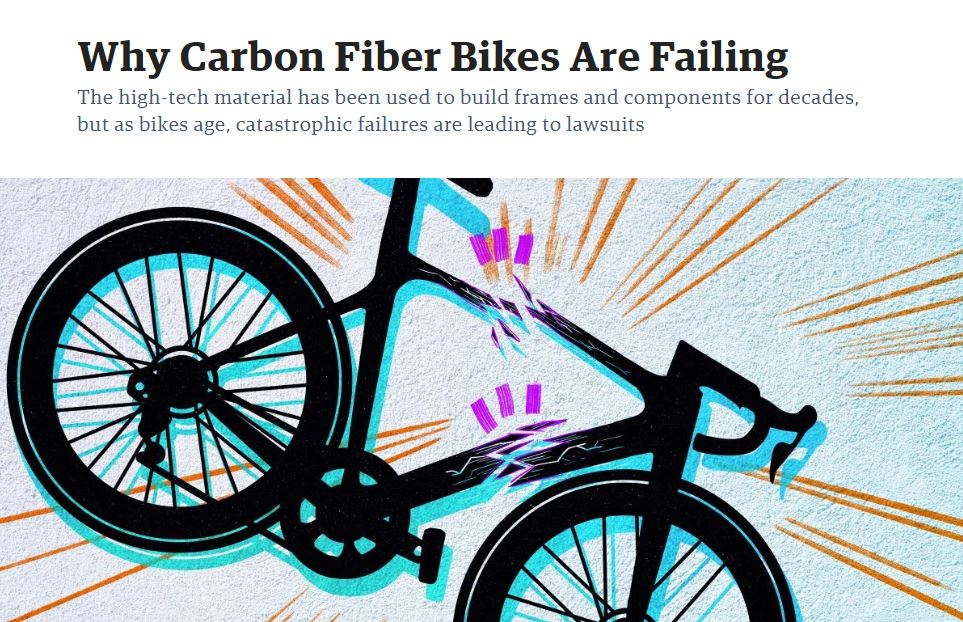 It’s worth reading a great new article by Eric Barton in Outside magazine, “Why Carbon Fiber Bikes Are Failing,” because he writes a balanced account about what’s happening with these bikes. There are more and more lawsuits nationwide every day because of components failing on aging bikes, poor quality production, and more. 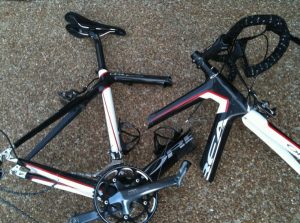 I talk in the story about my experience with the bikes as a lawyer and avid cyclist. But don’t read it just to see what I have to say – the story captures the joys and dangers  of owning carbon fiber bikes. It’s important reading for all cyclists, whether you own a carbon fiber bike or are thinking of buying one. (It’s also a good reminder for any bike owner to inspect their bikes often for the early signs of trouble before a crash sends them tumbling into the street, often with catastrophic consequences.)

I own two carbon-fiber bikes: a Trek Madone road bike and a Giant mountain bike because I love riding lightweight bikes. And I have also represented two carbon fiber bike owners who suffered catastrophic injuries in crashes where carbon fiber components failed, and have heard of many other similar cases because I am a Bike Law lawyer in New York.

Carbon fiber is not always a dangerous material for bikes. If manufactured properly and professionally inspected for wear and tear, carbon bikes and components can be safe. But this is the problem: not all carbon fiber bike makers and component makers have the necessary high production standards, and many owners can’t tell when key parts are in danger of failing because they are not able to do the kind of inspection professionals can do.  It is the hidden dangers of carbon that can bite you…..

So word to the wise….. have your carbon fiber bike and components regularly maintained and serviced by experienced bike mechanics who are trained to properly install components following manufacturer recommended torque settings and who can carefully inspect for early signs of carbon damage or failure.

This is what I had to say in the story:

Attorney James B. Reed is a New York state representative of Bike Law and has handled two lawsuits where clients suffered catastrophic injuries when carbon-fiber components failed below them. He has heard about numerous others from people on the Bike Law listserv.

Reed and other experts in carbon fiber agree that any material can fail. Wrecks happen from faulty aluminum, steel, and even rock-hard titanium. The difference with carbon fiber is that it can be difficult to detect signs of damage that might signal imminent failure. Cracks and dents in other materials are typically easy to see, but fissures in carbon fiber often hide beneath the paint. What’s worse is that when carbon fiber fails, it fails spectacularly. While other materials might simply buckle or bend, carbon fiber can shatter into pieces, sending riders flying into the road or trail. And this kind of catastrophic destruction can happen to any part of a bike made with the material.

“I’ve seen accidents from a whole range of carbon-fiber components—handlebars, forks, seatposts, entire frames,” Reed says. “As a lawyer, the question is, ‘What’s the cause of the failure?’”

Carbon fiber used to be used only in expensive bikes, but now it’s used in many bikes, and crashes that follow part failures are on the rise, and based on the court ruling in Illinois, more lawsuits are likely on the way related to carbon-fiber bike parts.

Lucas Elrath, a bicycle-accident expert for a forensic company in Philadelphia and the owner of a home-built carbon-fiber bike, had a few great quotes in the story worth noting:

“There’s an old saying in bike manufacturing: It can be lightweight, durable or cheap – pick two. A lot of these carbon-fiber components are lightweight and cheap, but they are not durable.”

“It’s completely reasonable for someone who wants a lightweight bike to look at carbon fiber, but they need to understand the risks. Absolutely this is getting ignored.”

Roman F. Beck, another bicycle-accident forensic expert, warns of the long-range implications of bike makers using carbon fiber material, including mountain bike companies, especially now that there are so many secondhand bikes on the market.

“As good as (many) frames are, what happens when someone rides five or 10 or 20 years from now? Mountain bikes take a lot of punishment, but nobody knows how long these frames will last in that environment.”