After Son’s Bike Crash, Father Gears Up Fight For Safer Streets For Cyclists, Pedestrians In Ithaca 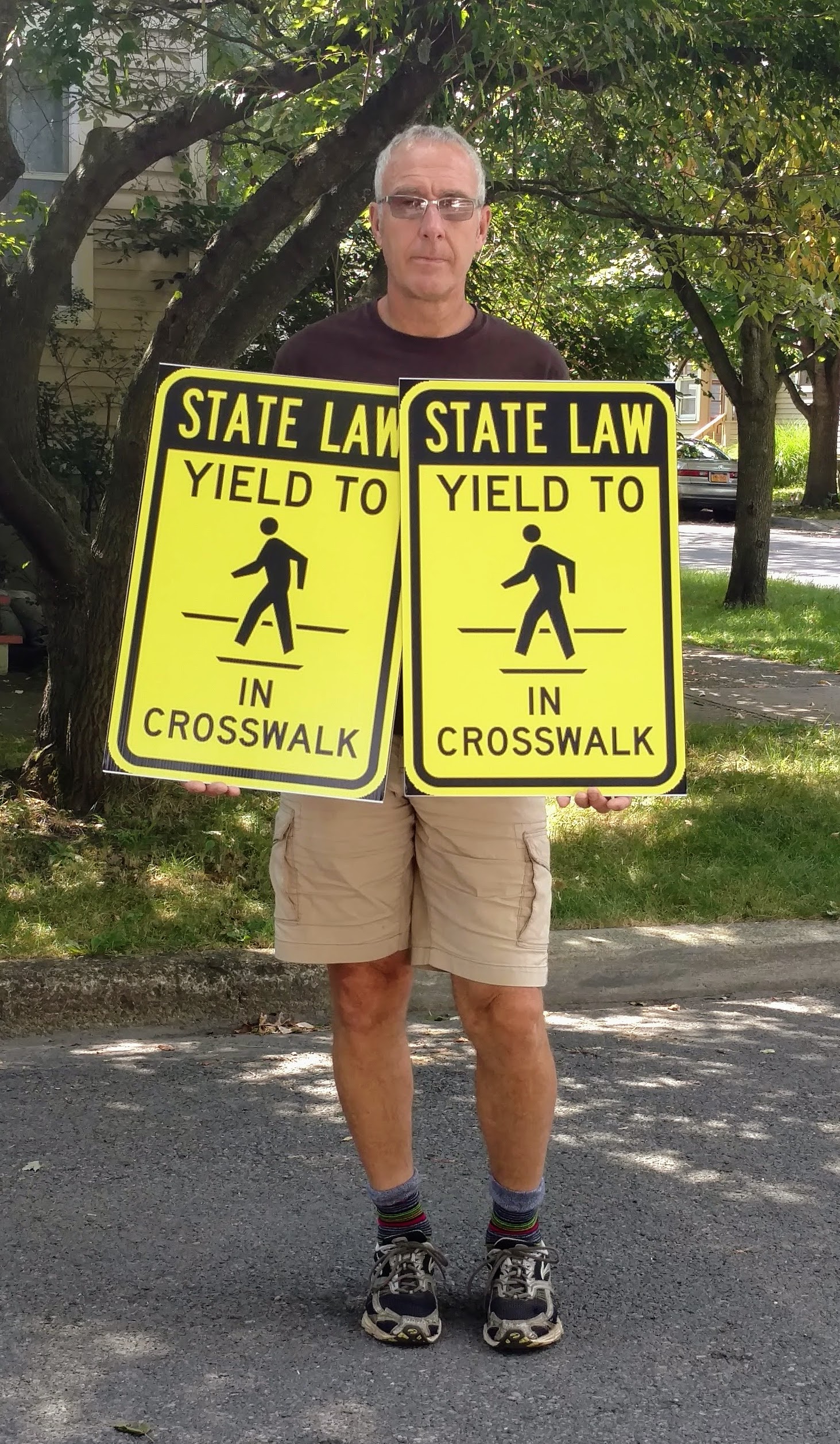 Armin Heurich with some of his yield signs.

Armin Heurich of Ithaca, the president of the Finger Lakes Cycling Club, has written an excellent guest blog post about his long battle for bicycle and pedestrian safety in Ithaca, a big issue in a progressive – but unsafe – city. The turning point in his struggle for safer streets is very personal ….

Why is a state traffic law almost completely ignored and unenforced in some cities, and almost universally respected in others?

I’ve been pondering this question for many years now in Ithaca, N.Y., where I have lived since 1997. Section 1151a of the New York State Traffic Law states that: “[w]hen traffic-control signals are not in place or not in operation, the driver of a vehicle shall yield the right of way, slowing down or stopping if need be to so yield, to a pedestrian crossing the roadway within a crosswalk on the roadway upon which the vehicle is traveling, except that any pedestrian crossing a roadway at a point where a pedestrian tunnel or overpass has been provided shall yield the right of way to all vehicles.”

Most states in the U.S. have similar laws in the books. Most of us have visited a city or town where we can step foot in a crosswalk where there is no traffic light and marvel as all oncoming vehicles travelling in both directions respectfully come to a complete stop.

I have visited many cities in Vermont, New Hampshire, Massachusetts, Maine, Washington, Oregon and California where one can safely assume that motorists will indeed yield. Yet in Ithaca and so many other cities and towns across the country, casually stepping into a crosswalk at an intersection with no traffic light involves putting your life at risk. When a vehicle does finally slow down, you can’t count on vehicles travelling in the other direction to follow suit, since all bets are off.

I am decidedly an urban dweller. When I was hired for a job as a librarian at Ithaca High School, my wife and I initially considered living in the lovely countryside, since we love all forms of outdoor adventure from cycling and hiking to cross-country skiing. Ultimately, we decided to live in the heart of the downtown Northside neighborhood, since it allowed us to bike or walk to work.

Cycling and walking are my primary means of transit both for business and pleasure, and we are only a mile away from some beautiful county roads that are very welcoming to cyclists, so living in the city was a great choice for us. It’s hard to imagine a better place for cycling, if you love the challenge of hills and appreciate breathtaking terrain. My direct bike commute is actually too short, so I typically add some hills and extra distance for a good morning workout.

While the county roads are mostly quiet and safe, with lots of low-traffic options, the same cannot be said for the city streets of Ithaca. Our small city is criss-crossed by state highways running east/west and north/south, including routes 79, 96 and 13.

These highways turn into mostly one-way city streets with a steady high volume of traffic, especially during business hours. Many motorists seem to be impatient and annoyed while driving through the city to their final destination. Ithaca is a waypoint to many, and pedestrians and cyclists are just another impediment along their way. Only one example of the challenges facing pedestrians is Seneca Street, which is Route 79 as it continues east through the city.

Try crossing Seneca Street at the Geneva Street intersection, and you are in for a rude awakening. There is a stop sign on Geneva Street, and there is no sign reminding motorists of the state law requiring them to yield to pedestrians. In fact, there is a dearth of such signs anywhere in the city. I have waited upwards of five minutes at that intersection waiting to cross, even with two feet in the crosswalk as I attempt to make eye contact with motorists. Of course, cyclists face the same exact challenges as they attempt to brave the crossing.

For many years, I have been asking mayors, members of Ithaca’s Common Council and the city engineers for more signs to no avail. I also ask why we have such an unfriendly pedestrian and cycling culture compared to many other municipalities, when we take such pride in being a caring and progressive-minded community. The best answer I get is that it is a cultural thing and a mystery that might not ever get resolved. I have attended Common Council meetings, Board of Public Works meetings, and open houses in which specific infrastructure projects are shared for public feedback. I keep asking the same questions, and get unsatisfying answers. I usually end up feeling ignored or sidelined, even though I have carefully chosen my words and present my perspective in a polite and thoughtful manner.

This summer, our family enjoyed a trip of a lifetime, which involved cycling and walking through many great European cities, including Copenhagen and Amsterdam, two of the most cycling- and pedestrian-friendly cities. We marveled at the infrastructure and the feeling of safety for cyclists of all ages and skill levels. We biked every day and logged nearly 100 miles of urban cycling in our week of sightseeing in those two cities. I took endless mental notes about how the cities were completely transformed through seamless infrastructure, and looked forward to sharing insights with friends and community members.

Then, a week after our return, my 16-year-old son was hit by a car while cycling in Ithaca. He stopped at a four-way, then continued on his way north on Albany Street until he was struck by a motorist heading west on North Titus Street.

The driver ran the stop sign and claims not to have seen Toby, who has struck hard in the ribcage. Toby rolled onto the hood of the car, causing some noticeable damage to the bodywork, then rolled onto the pavement after the motorist came to an abrupt stop. He spent seven days at Upstate Medical Center in Syracuse with a fractured rib and a collapsed lung, but was very lucky, since he did not concuss.

While I was sitting at his bedside during his painful convalescence, I became increasingly frustrated about Ithaca’s unfriendly streets. I felt like I failed him as well as the membership of the Finger Lakes Cycling Club by not being a more decisive advocate for bicycle and pedestrian safety. It was time for action. I thought up a renegade action that would likely start a community conversation about this issue; I got to work on social media and touched base with my local copy shop about the logistics of printing signs on rigid plastic.

My plan was to print the official state sign that states, “State Law: Yield to Pedestrians in Crosswalks” on rigid plastic, the kind used on political yard signs. I would make as many as I could, then assemble a team of like-minded friends in the community to zip tie the signs at dangerous intersections. The signs would have to be installed in a convincing manner, so as to fit right in with existing signs and not obstruct the view of motorists.

First, I contacted an Ithaca printer and emailed the graphic file for my prototype signs. Then I started a GoFundMe account and set a goal of $500 to cover the expense of sign production. Finally, I took to Facebook and shared a few posts about this idea on my wall, along with a link to my fundraising site. I have a good number of Facebook friends, many of whom live in and around Ithaca, but I was unprepared for the staggering response. In just three days I had raised over $400, and after a week I had surpassed my goal by nearly $100.

Meanwhile an Ithaca-based journalist named Mark Anbinder read about my project and interviewed me for an article that was to appear on 14850.com. Also I heard from many others in the Ithaca area who had accidents or near misses, including Ithaca Alderman Ducson Nguyen, who was hit by a car while cycling a month before Toby’s accident. The collective sense of frustration with the status quo and the encouraging words about the project kept me motivated.

I ended up getting about 50 signs printed, and with the help of friends, managed to get the signs placed on the most dangerous intersections by mid-August.

The community reaction was immediate. I was having conversations with neighbors and friends daily, and the overwhelming consensus was that the signs were making a difference. Drivers were more likely to yield to pedestrians in some of the most troublesome intersections. Local citizens and members of Common Council were urging the Board of Public Works and the city traffic engineer to install permanent signs and do more to get motorists to comply with state law. Residents were discussing the issue regularly on online forums, and the support for increased signage and enforcement was overwhelming.

About the time that I gave up on seeing Mark’s article on 14850.com, he published his piece, which was timed to appear during the first week of school

Mark’s excellent article raised much greater awareness about my campaign, and increased pressure on city leaders to take action.

I received a warning email from the supervisor of public works that my signs were out of compliance with state DOT regulations, and that they would be removed. While I fully anticipated this eventual action by the city, I was hoping that the signs would last much longer. My dream was that they would be systematically replaced by permanent ones, but that was not the case. 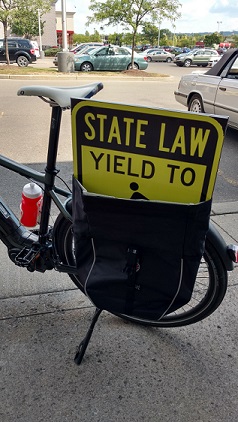 However I am more hopeful and optimistic now than ever before. I have heard that the BPW has agreed that more signage is necessary, and that it will be installed in a reasonably short order. The question about increased enforcement keeps coming up as well, and the city is looking at possible solutions to address this problem.

After my temporary signs came down, I circulated an online survey, asking respondents to reflect on the impact of signs, the process of requesting safety signage, and to suggest intersections that need increased signage and enforcement. My next step is to summarize the survey results from nearly 50 residents and present it to the mayor, Common Council, city engineers and the BPW.

If you are feeling helpless about the pedestrian and cycling safety concerns in your community, I hope that my story gives you hope and possible strategies for being a catalyst for change. While Ithaca has a long way to go, I believe that the emotional energy invested in this project has already paid off. Ultimately, my goal is to change the culture of our city with regard to respect for non-motorized transportation, even while our downtown experiences unprecedented growth.

Please feel free to contact Armin at aheurich@gmail.com if you have suggestions on or questions about his initiative.

Armin Heurich is the president of the Finger Lakes Cycling Club and the faculty adviser of the Ithaca High School Cycling Club, where he works as a school librarian.